LinkedIn Elevate - Is this the future of corporate social media?

This week Linkedin unveiled a desktop and mobile app called Elevate which could have a huge impact on how brands synchronise company-wide efforts for sharing content through social media. 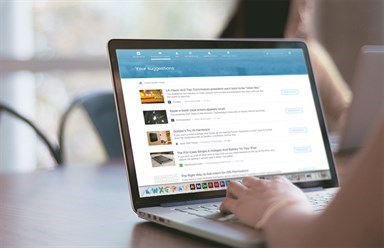 Over the last 2 years Linkedin has been developing its business with a major emphasis on content through the acquisition of services like Pulse and Newsle. However Elevate may prove to be their most important new feature yet.

What does it do?

It solves a problem which many companies have in constantly struggling to find an audience online and often finding their content sinking without trace on social media. One of the best and currently under-utilised ways to prevent this is by having employees share company content through their own networks rather than only pushing it through your official channels. Elevate is designed to make this process really simple by suggesting the share to employees when they log in to Linkedin.

Most employees would happily share company news updates and blogs, but rarely think to do so – Linkedin says only 2% of employees currently share their company updates on the platform. This app will put the option to share right in front of them and could help to massively increase this figure.

Elevate also offers content curation options, which presents a wide range of shareable content tailored to the interests of your audience from various sources – meaning employees can remain visible online without constantly having to scour the web for things to share.

Okay, what’s so great about that?

Rather than your social updates existing only in the bubble of your followers, every time an employee shares that same update then the reach of the post increases exponentially every time. On Linkedin the average employee has 10 times more connections than a company has followers. Not only does this mean your content reach a far wider audience but it is reaching an audience of professionals; making it a godsend for B2B companies particularly. Multiply this several times over for each employee you have and there is a very obvious benefit in terms of social reach.

In turn these shares should drive traffic to your site, build trust and hopefully convert to sales. Social activity is increasingly viewed as a positive ranking factor by Google; if your employees are sharing your high quality content, and hopefully their networks are sharing it further, this can massively boost your social signal and help to improve search engine visibility.  The social results have certainly been proven by those who have tested the app, as product manager Will Sun says:

Is there really a future in this?

As social media becomes an even more crucial element of marketing campaigns everywhere, it would be a surprise if similar options are not available on most social networks in the future; Linkedin is simply ahead of the curve on this one. Facebook and Twitter already offer sophisticated targeting options for advertising purposes and the ability to target specific people with suggested posts for them to share would seem like a natural progression.

While those other networks are less business orientated than Linkedin, the ability to synchronise company-wide sharing is just one of many uses such features could have. Increasingly, it would seem like social media will become a company-wide program in future rather than the sole responsibility of the marketing team.  Many of the most web-savvy companies have already begun utilising this approach and it is expected to become more common in the coming years with the introduction of tools such as Elevate.

Elevate is currently available by invitation only, but is expected to be available to all users later this year.